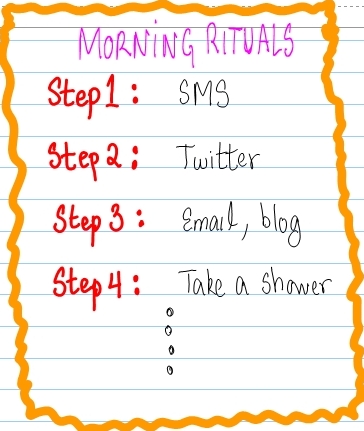 … and I can’t help but notice that this is an all too common story. With the plethora of technology and social networking sites available these days, technology has more or less taken over our lives!

My first experience with social networking was via Friendster back in 2004, which for the record doesn’t even exist anymore! And then came along Orkut, Facebook, Twitter and finally Google Plus. The only one that I personally like is Twitter. Facebook was fun at first but then i grew up and it lost its charm and to be honest I have no interest in visiting farms!

Don’t get me wrong, I think social media is wonderful because it gives power to the ordinary man to be heard and yadayadaya but that was before celebrities started getting twitter and my whole timeline got filled with crap about them! Honestly, WHO THE HELL CARES!? Apparently, a lot of people!

I’ve met some really wonderful people through twitter and I am really glad that I joined it! However, you can’t let social media take over your life! Just yesterday I was reading a blog by someone you could call a moderately famous blogger and they stated that people are breaking up over social media. That is something my 18 year old self could have totally related to but my 24 year old self fails to comprehend it. What the…

Moreover, people complain that others gossip about them based on what they have said on Facebook/Twitter. Either don’t say it or just don’t care about what others have to say because people say a lot of things. I’ve never been the one to hide my feelings and I am usually very open about how I feel, if I feel like telling my friends I love them then I will just do it on Facebook or wherever. People can think whatever the hell they want but telling people that you want to hump them on their Facebook wall is what I would classify as going a little overboard but HEY! to each their own. If you feel like doing it, just do it, as long as you are not implicating others or hurting others. As I always say, screw morality and society because if you can’t be nice and understanding towards other human beings then what good is a sense of morality and righteousness?

So leave me a comment letting me know what your morning rituals are like and if social networking is a part of it!

9 thoughts on “Is social media taking over your life?”

©2011-2017 This stuff is mine! Go get yours! Since I was nice enough to create a non existent copyright please don't copy or credit where credit is due. Please and thank you!
Loading Comments...
Comment
×
%d bloggers like this: