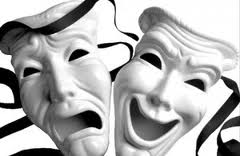 “The uniqueness of self cannot be pigeonholed! The self is always changing, always in transit and it’s preposterous to think it can be nailed down by a definition. Only small minds would think so.” Moranna from An Audience of Chairs by Joan Clark.

The character of Moranna echoes my sentiments. Yet, the concept of self is one of the most fundamental concepts of sociology. Goffman aptly described the concept of self as a sense of who one is. He didn’t directly state whether self is always changing or not,  instead, he described how we have an on and off stage persona. Does that mean we are always acting when people are watching? Are we always giving a performance? Are we all actors in our own right? (oh how wonderfully dramatic!)

While everyone has varying viewpoints about this concept, I don’t believe that all of us are always acting in front of others. Instead, I believe that we choose to hide some of the aspects of our personality to portray a more favorable image of ourselves. Is that called acting?

Sure, there are people who portray a completely different image from what they are but we don’t call them normal people we call them reality stars;)

What do you think?

8 thoughts on “Are we all actors?”